The ubiquitous application of deep neural networks (DNN) has led to a rise in demand for AI accelerators. For example, the Tensor Processing Unit from Google and its variants are of considerable interest for DNN inferencing using AI accelerators.  DNN-specific functional criticality analysis identifies faults that cause measurable and significant deviations from acceptable requirements such as the inferencing accuracy. This talk will examine the problem of classifying structural faults in the processing elements (PEs) of systolic-array accelerators. The speaker will first analyze the impact of stuck-at faults and present a two-tier machine-learning (ML) based method to assess the functional criticality of these faults. The problem of minimizing misclassification will be addressed by utilizing generative adversarial networks (GANs). The two- tier ML/GAN-based criticality assessment method leads to less than 1% test escapes during functional criticality evaluation of structural faults. While supervised learning techniques can be used to accurately estimate fault criticality, it requires a considerable amount of ground truth for model training. The speaker will therefore present a neural-twin framework for analyzing fault criticality with a negligible amount of ground-truth data. A recently proposed misclassification-driven training algorithm will be used to sensitize and identify biases that are critical to the functioning of the accelerator for a given application workload. The proposed framework achieves up to 100% accuracy in fault-criticality classification in 16-bit and 32-bit PEs by using the criticality knowledge of only 2% of the total faults in a PE.

Prof. Chakrabarty is a recipient of the 1999 National Science Foundation Early Faculty (CAREER) Award, the 2001 Office of Naval Research Young Investigator Award, the Mercator Professor award from Deutsche Forschungsgemeinschaft, Germany, for 2000-2002, and over a dozen best paper awards at top conferences. He is a recipient of Duke University’s 2008 Dean’s Award for Excellence in Mentoring, and a recipient of the 2010 Capers and Marion McDonald Award for Excellence in Mentoring and Advising, Pratt School of Engineering, Duke University. He was also awarded the Distinguished Alumnus Award by the Indian Institute of Technology, Kharagpur, in 2014. Prof. Chakrabarty has served as an ACM Distinguished Speaker, a Distinguished Visitor of the IEEE Computer Society, and a Distinguished Lecturer of the IEEE Circuits and Systems Society. He is also a recipient of the Humboldt Research Award (2013) and the Humboldt Research Fellowship (2003), awarded by the Alexander von Humboldt Foundation, Germany. He holds 18 US patents and has several pending US patents. He served as Editor-in-Chief of IEEE Design & Test of Computers during 2010-2012, ACM Journal on Emerging Technologies in Computing Systems during 2010-2015, and IEEE Transactions on VLSI Systems during 2015-2018.

Prof. Chakrabarty received the B. Tech. degree from the Indian Institute of Technology, Kharagpur, India in 1990, and the M.S.E. and Ph.D. degrees from the University of Michigan, Ann Arbor in 1992 and 1995, respectively, all in Computer Science and Engineering . During 1990-95, he was a research assistant at the Advanced Computer Architecture Laboratory of the Department of Electrical Engineering and Computer Science, University of Michigan. During 1995-1998, he was an Assistant Professor of Electrical and Computer Engineering at Boston University. 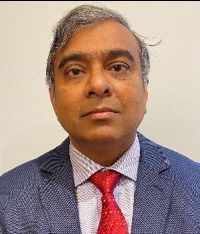