Dr. David Pan, The University of Texas at Austin

This talk will present some recent trends and efforts toward agile and open electronic design automation (EDA), in particular leveraging AI/machine learning with domain-specific customizations. I will first show how we leverage deep learning hardware and software to develop an open-source VLSI placement engine, DREAMPlace [DAC’19 Best Paper Award, TCAD 2020], which is around 40x faster than the previous state-of-the-art academic global placer with high quality. DREAMPlace 2.0 and 3.0 have also been released to tackle detailed placement acceleration and region constraints.  I will then present the DARPA-funded project MAGICAL which leverages both machine and human intelligence to produce fully automated analog layouts from netlists to GDSII. MAGICAL 1.0 has been open-sourced, and validated with a silicon-proven 40nm 1GS/s ∆Σ ADC [CICC’21]. I will also discuss the challenges and opportunities.

Dr. David Z. Pan is a Professor in the Department of Electrical & Computer Engineering at The University of Texas at Austin and holds the Silicon Laboratories Endowed Chair in Electrical Engineering.

He received his B.S. degree from Peking University, and his M.S./Ph.D. degrees from University of California at Los Angeles (UCLA). From 2000 to 2003, he was a Research Staff Member with the IBM T. J. Watson Research Center, Yorktown Heights, NY. His research is mainly focused on electronic design automation, synergistic AI/IC co-optimizations, domain-specific accelerators, design for manufacturing, hardware security, and design/CAD for analog/mixed-signal and emerging technologies. He has published over 420 technical papers in refereed journals and conferences, and is the holder of 8 U.S. patents. He has held various advisory, consulting, or visiting positions in academia and industry, such as MIT and Google. He has graduated over 40 PhD/postdoc students at UT Austin who are now holding key academic and industry positions. 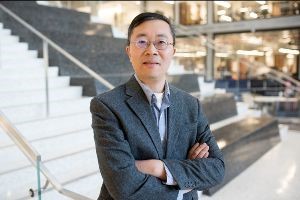